Was trying to come up with a fun Windows Phone app idea when I found some RSS feeds of recent earthquakes published by the US government (you can check them out here: http://earthquake.usgs.gov/earthquakes/catalogs/). I don’t know how useful such an app would be, but it seems like an interesting way to learn about the map controls.

Naming my project “Earthquakes” has an amusing side effect, when I send a new build to the emulator, I get to “Deploy Earthquakes.” 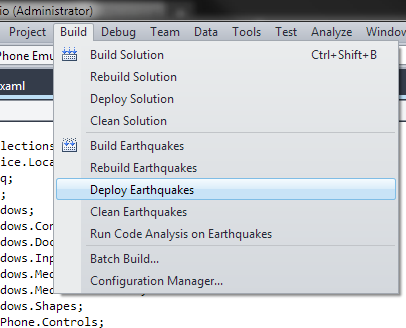 I’ve got a map parsing live data from the RSS feed and popping color-coded pins (based on magnitude) all over the map.